No Need to Fake It

I've been sharing with brides lately about how hiring a photographer who shoots college and pro sports can help produce real moments from their wedding.

I started documenting weddings when I was 14 and at 19, began shooting NASCAR races, NBA games and Clemson and South Carolina football.

So, how does this translate into better images for the bride? I'm glad you asked. Let me share an example.

At many of the weddings I go to, there's usually a moment when the DJ will say out loud to the crowd (just before the bouquet toss), "Okay folks, let's all count to three and then the bride can do a fake throw for the photographer." He will normally do the same for the groom, when he's about to throw the garter.

Right after that, I'll usually walk over to the bride and tell her that she doesn't have to do anything for me. I'll share with her that when she hears three, she can throw the bouquet. No need for a fake toss. In other words, she can do the real thing. I do the same for the groom as well.

This isn't a knock on the DJs. They're just doing what they've been doing for years, believing that they are helping the photographer. Traditionally, wedding photographers ask the bride to fake the toss so that they can capture it.

This is when hiring a wedding photographer with a background in sports can pay off. 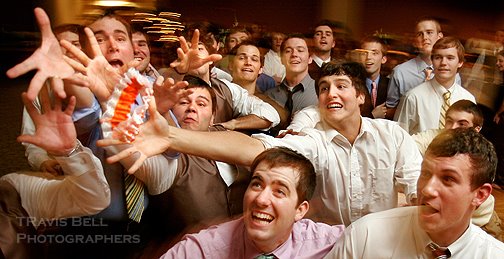 When I'm on the sidelines of a college football game, I can't ask a wide receiver who just caught a touchdown pass to go back and run the play again. I have to be ready. Over the years, as I've grown as a sports photographer, I've been able to apply many of the techniques used with sports into documenting weddings.

The end result for the bride is that when she looks through her book, she'll never have to say to herself, "Wow, this fake shot turned out great."